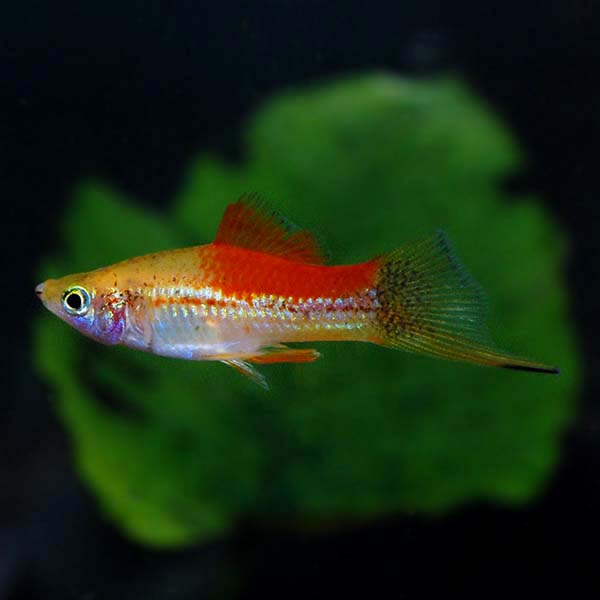 The pineapple swordtail fish is relatively non-aggressive. The only time they become aggressive is if more than one male is present in a tank that has at least one female. The males then become aggressive towards each other. If you make sure to either have only males, only females or females and only one male then the fish should be calm and suitable for a community fish tank. They are small, hardy and colorful making them an attractive addition to any community aquarium.

The pineapple swordtail fish needs plenty of space to swim but it doesn’t require a giant tank. The tank can be small to large sized. It requires a few hiding places for a bit of privacy. Plant and rock decorations may be light to moderate.

Care for the pineapple swordtail fish is relatively easy. They require little attention. As long as their water is kept at appropriate levels they are quite hardy fish. The temperature should be between 70 and 79 degrees Fahrenheit. They prefer hard and slightly alkaline water however, if you don’t know how to tell if the water is hard or alkaline the fish will be fine. The pH of the water should be between 7 and 8.

The diet of the pineapple swordtail fish is fairly simple. They are not picky when it comes to eating and can simply be fed fish flakes daily. It is recommended that for a treat they occasionally be fed live foods. Some options for live food for the pineapple swordtail fish are bloodworms, glass worms and tubifex worms. They also eat the algae that grows in the tank.

Pineapple swordtail fish give birth to live young that are called fry. It is not too difficult to breed this fish. Before they give birth the birthing female should be seperated from all other fish. After giving birth the female may return to the aquarium but leave the fry in their own bowl. If the female is left with her young she could eat them. 20 to 80 fry are produced from a single birthing of the female pineapple swordtail fish. The fry will eat powdered flake foods. They reach 3 to 4 inches at maturity, at which point they may mingle with other fish safely.

The female pineapple swordtail fish is larger then the male. The sword shaped tail fin is more prominent on the male then on the female.