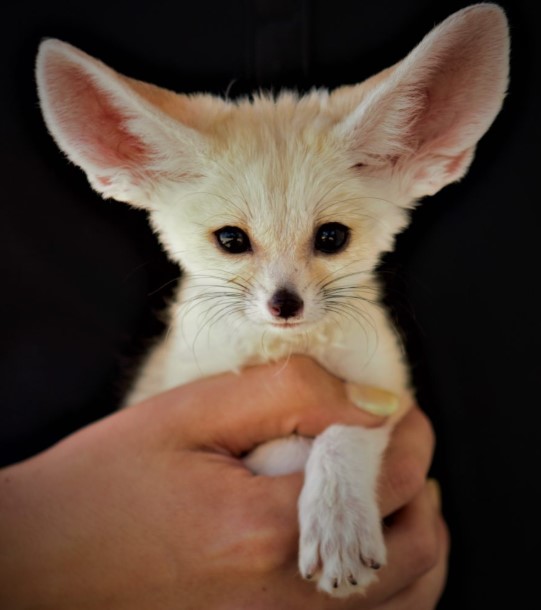 Fennec foxes, native to the arid deserts in North Africa, grow to be 16 to 18 inches long, 8 to 10 inches tall and weigh 2 to 4 pounds. They live on average 12 to 16 years in captivity. The acquirement of a fennec fox is not a short time commitment. It is always important to know what to expect when getting a new pet, but this is especially true for rare and/or exotic pets such as fennec foxes.

Fennec foxes most notable characteristic is their huge ears. Despite this they are the smallest canine (dogs, foxes, etc) alive today. They pant quickly when hot to dissipate heat and shiver when cold, usually when the temperature is below 68 degrees Fahrenheit. Fennec foxes are active, energetic, curious, social, agile, excellent diggers and escape artists. They need a lot of attention. It should always be remembered that even as pets fennec foxes are not domesticated animals the way pet dogs and cats are. They are tamed wild animals.

When the owners of a fennec fox are home, it should be allowed to roam freely (mostly; it shouldn’t be let into dangerous areas for it). When out it should be supervised and when it can’t be supervised it should be kenneled. A dog crate works fine as a home for a fennec fox. Outside pens can be used but they must be escaped proof so that the fennec fox can neither climb or dig its way out. Fennec foxes can be taken on walks using a leash but care must be taken that it not become startled. A startled fennec fox could slip out of its collar and dash away. It is a very fast animal and unlike to be recaught once it escapes.

In order to house train a fennec fox a litter box will work in most cases. A covered one usually works best since it likes to dig and without a cover the litter will spill out on the floor when the fennec fox digs. House training is simple but it could take some time to fully accomplish. Taking the animal frequently to its litter box or to an outside area and giving it lots of treats for using either the litter box or secured outside pen will ultimately lead to a happily house trained pet. Never punish the fennec fox when it urinates or defecates in the house. If you catch it in the act simply move it to its litter box or outside area.

Fennec foxes are omnivorous and will eat anything they find. A good base for its diet is a dry food marketed for wild canids (canines). An alternative is premium dog or cat food. Don’t use grocery brands. Supplemental food besides the dry wild canid, dog or cat food include fresh vegetables, fresh fruit, pinkie mice, eggs, crickets, mealworms and canned wet dog or cat food.