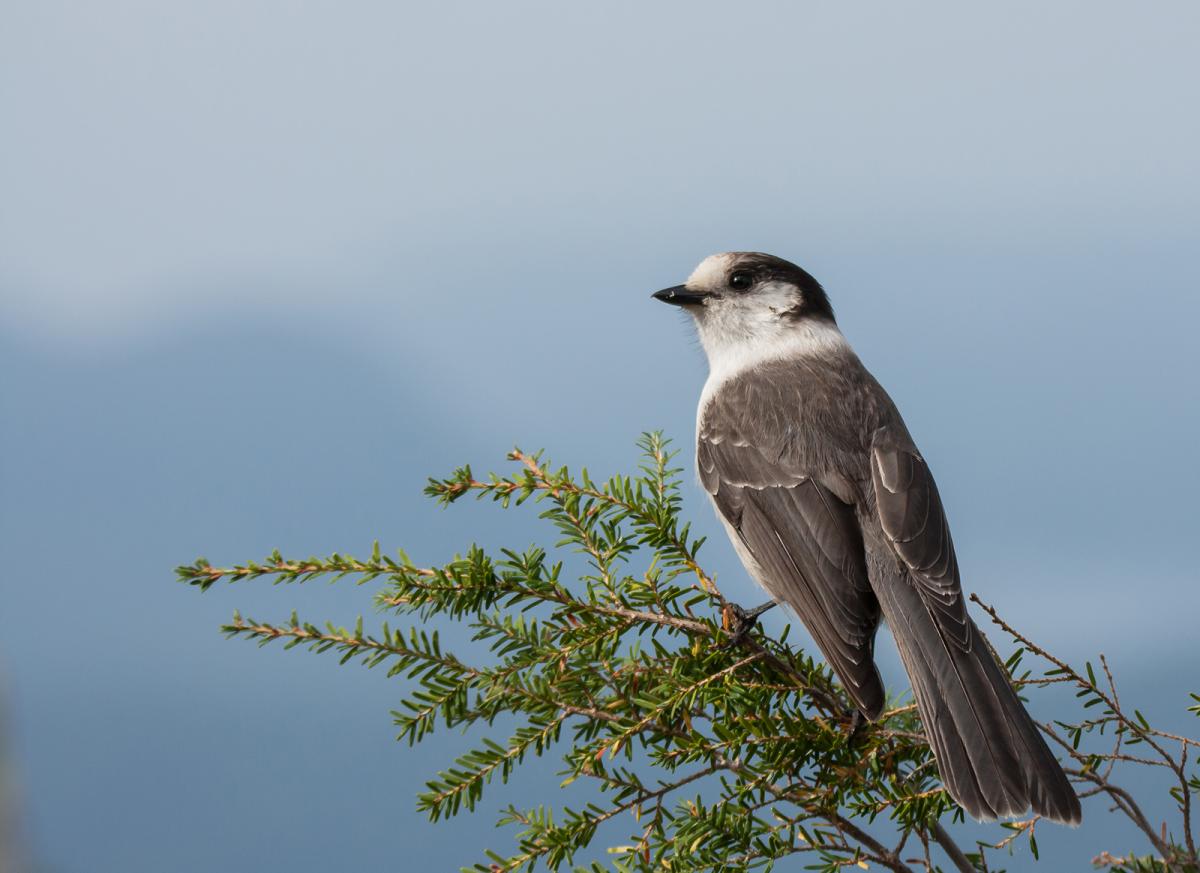 The tendency for most birds, in the Northern Hemisphere, is to migrate to warmer climates with the onset of winter. However, the Gray Jay does not migrate at all, unless it cannot establish a territory of its own.

Gray Jays spend the large part of the warmer months building up a food supply for themselves, and for their future brood. A great deal of energy is spent in finding food, and hiding it in various locations. They use their saliva to stick the food to something, such as under some bark on a tree branch.

When some food is offered to a Gray Jay it will fly down, and pick it up in its mouth. Then, it would slowly move it around in its mouth, almost as if it was considering whether to accept the food, at all. It is actually covering the item with its sticky saliva. If the observer hoped to witness it gratefully eating the food on the spot, then he, or she, would be very disappointed. The lovely, gray and white bird will just dart off somewhere, only to return again without, apparently, having eaten the food item.

Gray Jays have been observed to cache as much as 1000 bits of food over a territory, approximately 150 hectares in size. They seemed to have no difficulty in finding where they have hidden everything. Their territories are staunchly defended from other Gray Jays, as their food supply is vital to their survival. The larger territory seems like too much to cover. However, it is how they have managed to fend for themselves without having to migrate.

The cold temperatures mean that their food will keep from spoiling. These birds are very well insulated against the cold, as well. Gray Jays are opportunistic feeders. They will even eat meat, carrion, eggs, and nestlings. Gray Jays were also called “meat jays”, and “camp robbers” because of this. Their nickname, “Whiskeyjack”, is a corruption of the Algonquin name for a mischievous spirit.

For all their activity during the warmer months, Gray Jays appear to very slow moving in the winter months. This is thought to be a strategy to preserve energy, as their flying seems to be predominately that of flying from one stored food location to another.

Another remarkable survival tactic is the early nesting period of the Gray Jays. A female will lay a clutch of approximately 3 eggs in March, which will then hatch out sometime in April. The nests are insulated with cocoons, lichen, hair, and grouse feathers. Only 10 percent of the spring migrants will have returned by the time the fledglings have left the nest.

Gray Jay fledglings leave the nest at about 23 days after hatching. However, they stay very close to their parents for another 3 weeks, or until their tail feathers have fully developed. The juveniles are an all-over dark gray in color, and do not resemble the adult birds, at all. The young will fight for dominance with each other, until there is one sole winner. The other siblings will then have to find new territories for themselves, and this may be why many Gray Jays have been found as far south as New Mexico, and Arizona.

Gray Jays that have not managed to produce a brood are usually allowed to assist with the feeding of fledglings, and some of the ousted juveniles will attach themselves to one of these non-breeding pairs.

All of these adaptations have allowed the Gray Jay to live, at least, twice as long as the average migratory bird, which is about eight years. The longest recorded lifespan of a Gray Jay was an astonishing 16 years.

Climate Change and the Gray Jay

There is concern that the advent of global warming may be contributing to the population decline of the Gray Jay in places like Algonquin Park in northern Ontario, where the Gray Jay is its most famous resident. This is because studies have indicated that its numbers have declined by as much as 50% since the 1970’s.

However, the Gray Jay has proven itself to be excellent in ensuring its successful survival. In the harshest of climates it has worked out a system that has enabled it to survive without migrating, and the result is that it has managed to do so, and increase its lifespan by many years.